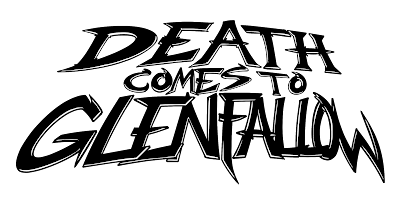 June 11th, 2020
It's been far to long since I've posted an entry to this blog.  Sorry everyone, the end of 2019 and all of 2020 has been chaotic (to say the least).  To get back into the swing of things I'm posting this entry to let everyone know where we are with Tarot Adventures, Book Three: Death comes to Glenfallow.
What is 'Death comes to Glenfallow'?
Death comes to Glenfallow (DctG) is the third book in my Tarot Adventures series.  Each is an adventure module themed after a particular card of the Major Arcana from the traditional Tarot deck.  DctG carries with it a particularly import bit of NPC character evolution, the 'change' that underlies the larger story, all set against this horror story / zombie movie style adventure.  It will be easy for groups to get multiple horror-filled game sessions from this book.
Where we are and what has been done:
The alpha level play test sessions were conducted virtually.  Our play testers were subjected to the DctG horror story over multiple game play sessions.  With the holiday season at the end of 2019, personal schedules, and then full blown 2020 happening, it took a few months for those game play sessions to wrap up.
There was some really good feedback about DctG and the entire play test group has declared that they really enjoyed the adventure.  Notes have been gathered up, particularly along clarifying the mystery elements and some changes to pacing and introduced mechanics.  Presently the playable draft of the beta test edition is being assembled, beta test game masters have been lined up, and play testing at that level will begin soon.
Art:
Anthony Ojeda is almost done with the book's cover! He has been sending in work-in-progress images very regularly.  For this book we are once again going with a wraparound cover format and, I have to admit, it looks amazing!   The title card for the book cover has been lettered by none other than Brian Lee and now only needs its final coloring. The black and white base version of the title card is shown above.
We'll be crowdfunding this book to pay for interior art, also created by Anthony Ojeda, to make this the first book in the Tarot series that has been illustrated by a single artist.  This decision was made so that the art would be more uniform in stylistic execution.  With an adventure that is so thematically intense it just made sense to keep the art as consistent in style as possible.
Maps are being developed by the remarkable James Lee.
What's next:
Throughout the remainder of this week assembly (formatting, editing, etc) of Death comes to Glenfallow's Beta test document will continue.  I'm hoping to have it completed by June 17th so that it can be distributed to the game masters before launch of the crowdfunding campaign.  This will provide time for me to collect impressions from the various beta-test groups and publish their feedback to the KickStarter campaign.
Crowdfunding for this book will be done to pay artist Anthony Ojeda for creation of interior art/illustrations.  To this end the KickStarter campaign is being created with its first goal being funding for two full page illustrations.  Additional illustrations will be funded as stretch goals are reached.  The cover art will be displayed for the KickStarter campaign and we'll be sharing out work in progress on illustrations on the KickStarter page after we reach funding goal.
Editing will begin after the feedback is in from the beta test groups, meaning it will begin during the last week of the campaign.
The Crowdfunding / KickStarter campaign:
Creating a KickStarter campaign requires a lot of research, comprehension of inherent costs, contingency planning and patience.  Given the current Covid-19 pandemic, civil unrest and the early stages of recession that seem to be upon us here in the U.S. I have had to make several changes during the development of this campaign.
Shipping within the United States remains fairly consistent from before the pandemic outbreak, but international shipping is largely unavailable to several nations.  With the virus outbreak on the rise in my region (Kentucky) I don't blame any nation for being cautious.  Because of shipping uncertainty I'll only be offering signed copies within the United States and its territories.
To date I have fulfilled all ten of the KickStarter campaigns that I've launched which have successfully funded.  Artists commissioned for these projects have all been paid on schedule in accordance with their contracts.  With all of my campaigns I have resolved any problems that arose in shipping or production.  If you haven't backed one of my campaigns before, just take a look on KickStarter for campaigns under my personal account and campaigns launched under the company account .  I am very grateful for all the support I've received as I continue my adventure into publishing.
The eternal question: Where doe the money go?  For each of my crowdfunding campaigns money has been used for production costs (paying for art), printing & shipping expenses.  Any extra funds left over have been applied toward development of subsequent projects.  For DctG, I'll be following much the same formula, though I will be claiming a small portion of any extra funds as income this time with all remaining used for future projects.
I hope you are looking forward to Death comes to Glenfallow and will enjoy running/playing through it at least as much as I have enjoyed creating it.
Special thanks to Anthony Ojeda, James Lee, Patricia Lee, Brian Lee, my Patreon supporters and all of you who have followed my blogs.  Your support makes a tremendous difference.
W.S. "Sam" Quinton
Posted by W.S. Quinton at 8:00 PM 2 comments: