It's been a busy three weeks since my last post here.  Sorry for the delay, but life has been unforgiving with my time of late.  There are a few things I want to touch on today, so lets get to it!

It sounds like the continuation of a television drama, doesn't it?

A few days ago, on the Dungeons & Dragons 5th Edition closed Facebook group, I noticed that one of the admins had posted about a closed subscription group known as the "5e Adventure Academy".   As that group allows for advertisement of crowdfunding campaigns by members, I didn't think anything of it beyond the question "Facebook has subscription groups?"   Like many of us, I quickly turned to Google to see what information was out there about this group model.  One of the articles I found (released in the summer of 2018) can be found HERE (Written by Josh Constine).

For the record, I fully support people making money from content they create. I myself have a Drip page, I know several people who have Patreon pages and I am an avid creator and consumer on KickStarter.  I don't see anything wrong with people creating new content (within licensing boundaries) and making that content available to the community in a fairly priced way.

As this is a relatively new model for Facebook, it can seem a bit alien. There have been a wide range of responses to the announcement and posts by the Admin who made the announcement.  People have condemned the idea, supported the notion, been surprised by the list of contributors, and have expressed a wide range of opinions regarding this new development.

While I am not subscribing to that group, it isn't because I don't care for the model or that I'm condemning the use of Facebook in such a way.  The reality is that I'm a single father and a creator who puts almost all the revenue generated from my own work back into new projects. To be blunt, I can't justify the additional expense at this time.  Even as I write this entry, I wrestle with this decision because the list of contributors does include people whose work I am somewhat familiar with. I am of the opinion that you can always learn from others.  I'm afraid that I may miss out on a valuable learning opportunity, at least for the next few months, by staying out.

My understanding is that new, original content is going to be generated by the contributors within that group.  Such creative energy is something the RPG community always needs.  How you and I, the audience, choose to consume such content is up to us.  I am not endorsing nor condemning this new subscription group, but I do think that all of us should be aware of it.  If you like the idea, you can always elect to join and can leave if it doesn't live up to your expectations.  If you don't like the idea, don't subscribe.  It really is just that simple.

Full disclosure: During the discussion within the Facebook thread, I expressed my opinion that people charging for original content was a good thing, which prompted a bit of blow back directed at me and my releases.  When I went back to respond to the comments that had been directed at me, I saw that my comments as well as those who were actively discussing the matter in that same conversational "comment" thread had been deleted.  I did not ask for that to occur and I'm not certain what spawned that decision.  It does seem that one of my most vocal detractors has since left the group, which is unfortunate as I believe it is important to hear all sides of a discussion.  Whether he left voluntarily or was kicked from the group, I do not know. What I do know is that I did not ask for the content to be removed, for his criticisms of my opinion and my own creations to be censored, nor for my own comments to be deleted.  I'll chalk that up to admin or moderator intervention and leave it at that.

Work on WoP has picked up and is nearing completion as I now have all of the information from the backers who pledged at the Acolyte of Death and Fallen Hero levels.  While I had originally hoped to have all of that content formatted in before the Thanksgiving holiday, that didn't happen as life intervened (details involve my children, so I'm not going into that here).

I had believed that fulfillment would occur early, before December 1st, but now it seems it will be on time and be delivered in December.  This puts my holiday magic item book in jeopardy, but I'm working furiously to resolve the timeline.  More on that as it develops.

Christian Martinez is creating the final two art works for the book, and I believe they will be wonderful as he never fails to impress me.

To all of you who supported the campaign, pledged your support and helped make this book possible:  I thank you!

Several pieces of art for Whispers are now available on merchandise on my Society6 and RedBubble pages.  (More on that below)

Sites like Printful, Redbubble, Society6 and so many others open an opportunity for creators to expand the use and market for their art.  If you are a small publisher who commissions art for your work, be aware that before you use art you've commissioned you need to make certain you own or have license to use the art for merchandising purposes. I have written such language into the contracts I use with the artists whom I hire.  We negotiate the price for art with those rights in mind.

You're probably asking, 'But, will I make money?'.  I can't tell you that.  Personally, I've made about $18 after expenses on merchandise sales this first week.  Of that amount, about $4 is attributed to friends of mine who both liked the item(s) in question and wanted to support my efforts.  The remaining $14 were from users I do not personally know.  As I had already paid for the art in question, I'm calling that a profit.  This may not seem like much to many people, but for me I see it as a few grocery items for my kids.  Which is something I'm very appreciative of.

If you haven't explored these sites yet, take note that there is a considerable overlap in the type of goods they offer, the terms of sale, your own access to merchandise at discounted prices, and whether or not they have templates available for your use.

As most such sites have no fees for you to pay to maintain your page (they make their money on their cut of the individual sales), it is a nice way to offer merchandise to your audience if you cannot yet afford to have items produced in bulk.  Be aware that such merchandise has a smaller profit margin that if you had items produced in bulk and the retail price is often slightly higher than what you may otherwise charge.  This is due to each item being produced to order.

Examples of my own merchandise creations are indicated below. You can click on the image to go to the site to see other stuff I put together. This will give you some idea of the kinds of things that are available to these two sites specifically.  There are several other sites where merchandise can be created and it can be fun to play around with the images as you develop what the final product will look like.  As examples I have my "Ritual of Sacrifice Cutting Board" (yes, I think that is pretty funny) and one of the phone cases I designed using art from 47 Furious Tails (art by: Alexia Veldhuisen). 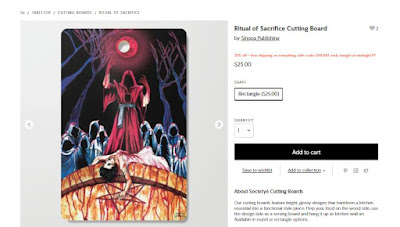 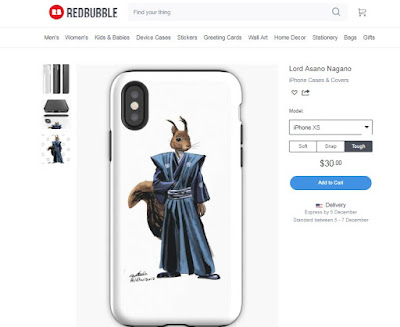 Drip, Patreon, Indiegogo and KickStarter are all valuable resources for us as creators.  It can seem intimidating when you first use them and can be disappointing if you don't reach your expectations.  I encourage you to keep creating, to been open and engaged with your audience, and to never give up on your efforts.  Being able to create is a wonderful thing.  Be proud of what you create, happy with how your audience receives your work, own your mistakes and your accomplishments and you will find that whether you make a dollar or a thousand dollars, you did well.

Thank you for joining me once again on my continuing adventure in game design, writing and self-publishing.  I hope that you find the information here of use in your own efforts and fun to read.

I hope you'll join me next time, as the adventure continues.