New products in development, what is going on behind the scenes, and art by Kelsy Cowan. 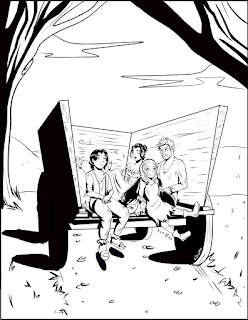 So much has been happening in the last few weeks with the RPG publications.

Firstly, the KickStarter for "Tale of the Wizard's Eye" is rapidly approaching it's funding goal, which is unbelievably cool!  The artists are excited to see people backing the project, and morale is good.

Secondly, "The Draw of Glenfallow" will be heading for formatting (minus art), then for another round of play testing.  Map development is going to be worked once "Tale of the Wizard's Eye" maps are complete (later today?).  Art is well underway, and the adventure design is solid.  As everyone who play tested it during the first round has asked "what happens next in the story", sequel titles will be released creating an expanded storyline.

Thirdly, the first sequel to "The Draw of Glenfallow" is in development.  Art has been commissioned, the story outline has been completed, encounters have been charted, and writing on that work will begin soon!  The piece above, from Kelsy Cowan is one of the pieces going into that book.  Nice work btw, Kelsy!

Artist Zachary Viola has agreed to work on an equipment /weapons book featuring exotic weapons from around the real world to be brought into the OGL 5th edition environment.  Look for some fantastic illustrations from Zack, playable statistics, historical references, mundane and enchanted versions to fit into your campaign.  You'll be seeing more illustration work from Zack, as his work found it's way into "Tale of the Wizard's Eye" as well (and it is awesome!)

The Rose of Relange rpg development has been on the back burner a bit, but work continues and I hope to have a play test document ready and in hands of play testers in July (2017).  Jennifer Fraggle Dee has already produced some fine images for the bestiary section, some of which have been seen in prior blog posts!

Other things going on:

Yes comic books are a favorite media of mine.  I'm investigating / researching the viability of releasing comic books in the near future (no easy feat).  More on this as things develop, but I'll go on record now as saying a crowdfunding campaign would be in order (as printing costs will be significant, and artists should be well paid).

Please do comment below if you have experience in producing Indie comics.  Research on this topic is helpful, but real world insights are fantastic!

Today marked a milestone for this blog as it has now had over 2000 views!  Thank you all for coming with me on this wonderful adventure.  It's been fun so far, but there is so much more to come.

I hope other new publishers can learn from my experiences (good and bad).

Remember to take care of your artists!