Kickstarter campaign and fulfillment, then "What's Next" and other stuff

The KickStarter campaign for Whispers of Persephone has been a tremendous success.  I want to thank all of you who have supported the campaign, shared the links and helped to reach all of its stretch goals.

This campaign was full of pleasant surprises.  The backers came out in force, seizing the backer reward tiers of Necromancer, Acolytes of Death and Fallen Heroes (all slots were claimed as of this writing).  As I write this, there are 37 hours left in the campaign.  I'm writing up material for the backer reward tiers, naming the Acolytes of Death and creating their character / NPC information based on the date provided. I am also formulating the obituary pages for the Fallen Hero backers, telling stories of noble effort and ignoble death.


Art is very nearly complete, and I am hoping to have the book in front of Pat for edits before the end of the week. With 24 pages of character data to complete, 12 pages of Acolyte background, 6 obituaries, and a smattering of quotes to insert, I am optimistic that I'll get this book to her shortly.

One of my favorite things about crowdfunding campaigns is sending out the material once it is completed.  Of all the material that goes out, I think the signed copies are my most favored.  With Whispers of Persephone, I will be fulfilling the PDF and PoD codes once I have the final editorial changes done and the book uploads (PDF), for the PoD codes I will fulfill those once the printer approval of the book is back (which usually doesn't take long).  Copies for signing will be ordered before the PoD code is released {this is because I'll already be in the Drivethru system, so I'll order those copies then build the PoD code}.

Saturday I announced that I had recently had a flash of inspiration.  This inspiration gave rise to a new book, which I am working on now for release this holiday season.

That's right, I intend to release it in the next few weeks.  That is because it is a shorter book and I've already managed to create much of it.   Art is coming in starting this weekend.  The art for this project is created by none other than Zack Viola (of The Steel Road fame).

As a fun thing to do, we've created 25 new, holiday themed magic items. Zack has sketched them (in the same style as The Steel Road) and we're going to release that book this November. The really neat thing though, is HOW we're going to do that.

We're going to have a short KickStarter campaign, with a small goal.  We're setting it to fund at $600 and it will only last for a few days (seven at most).  With this campaign we're going to have only one reward tier.... $4.  That tier will get you the PDF and a print on demand code for the book in hard cover.

Content:  6x9 hard cover, 25 magic items with each detailed on a full page, each item illustrated by Zack Viola on the adjoining page (so you don't have to page back and forth, they are right there together), Introductioni from Santa Dragon Claws and an illustration of the holiday dragon.  Due to the time constraint for people to get this book in by the holidays, we will NOT be including backer credits in the book, but we will be placing those on the product page attached to this blog.

Now this campaign happens fast, and here's why:

Drivethrurpg suggests ordering books by the 25th of November to have them in time for the Holiday season.  So we want everyone to have their PoD code well before then.  So we're ending the campaign on the night of the 21st of November at 10:45PM EST.

But wait, there is more to this...

The campaign will end that night, while I'm live streaming.  I will then trigger the backer survey to get the email addresses for PDF fulfillment.  But I will also be sending out the Print on Demand code to all backers that night!

You heard it, we're going to get those print on demand codes out just as soon as we can, the same night the campaign ends.

From Zack Viola and myself, we hope you will all enjoy the campaign, cherish the book, and check out the cool stuff we have coming out for 2019 as well!


This will be the final KickStarter campaign of 2018.  Death comes to Glenfallow is being moved up to 2019. 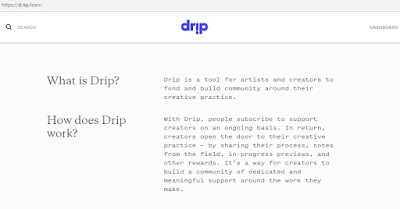 Last week Drip announced that the platform was shutting down next year and migrating all users over to the new platform.  My hope is that this will facilitate the implementation of several new features that are curiously missing from Drip in its current form.

Keep your eyes open here for more news on this as it breaks!

My own Drip page now has six subscribers (thank you all) and we're coming up on the end of the founding period.  My drip page offers truly behind the scenes information, news and access to play test material at the $1 level!  The monthly PDF release (currently one character, companion, creature or monster) comes with full color art and pages of content (stats, narrative, story hooks, treasures, example skill results, etc.) and is available at $3 and included the lower tier material as well. The Magic in the Mail tier subscribers receive all the benefits of the $3 tier plus a full color post card of the subject that month (it is sent in an envelope so it doesn't get marked up with postmarks) signed 'thank you' from me to the backers.  The post cards have a few notes on the subject to help with game play use.  Check it out below: 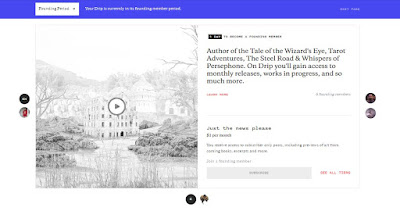 Thank you for joining me on my adventure in game design, writing and self-publishing.
As always, your questions are most welcome, so feel free to post them below. I'll respond as soon as is possible.

Until next time, Adventure Awaits!