As work continues on the first modules being released (still on schedule for June of 2017), I came face to face with an interesting question.

While playing in my weekend game, where two of us take turns as game master for the group, the question came up regarding how to account for the difference in experience awards for the characters we weren't able to play because we were running for the group.

While this question is still vexing our group, it occurred to me that creating a rule for this circumstance may be in order.

So I am presently working to design a rule set for players to award experience to the game master, for use on character advancement, when the game master role is shared in the group.

This is surprisingly difficult to formulate but I enjoy the challenge.

Feel free to offer comments below.  I welcome opinions on any of these.

Switching gears a bit.  Let us put the spotlight on the role of game master.

Understand that I am using the term game master in the generic sense, as that person who is handling the non-player character narrative aspects of the role-playing session.

Game masters running a table-top rpg session are generally appreciated not so much based upon the effort they put into preparing for the session, but upon the level of immersion their players experience.

When I say immersion I am referring to the suspension of disbelief, the depth to which the players are immersed in the story, and how involved the players feel as a result.  Basically the sense of "we were there" that the players can associate with the session.

To state my opinion bluntly:  a good game master facilitates immersion in the game at hand.

So how does one facilitate immersion in their game?

The game master has to be prepared.  This may seem obvious, but it is critically important.  Very few things interrupt the flow of play, thus disrupting immersion, quite like having to break the narrative to look up something.

Be prepared.
Assemble notes and make them easy for you to understand and reference.
Where possible, ready a visual reference for creatures or characters the group encounter
(Like the Gruff above) 😇  {cue shameless self-promotion}  😇

Be descriptive.  Know the sensations that would be stimulated in the encounter.  Does the Troll coming out from under the bridge smell of wet dog or of rotting meat?  Does the armor on the Elf knight sparkle in the starlight?  Can the characters hear the wailing screams of damned souls as they cross the portal into a hellish dimension?

These "little" touches can illicit a response in the players' imagination.  There is no need to overdue it. A little descriptive touch on your part can help the player build the image in her/his mind.

Know your players.  Different people respond positively to the various forms of encounters you may set up for their adventure.  Make every effort to format these encounters in a manner that makes them plausible, while still structuring such encounters as to engage the interests of all players.  (This can be tough, but is very worthwhile).

Be prepared to adapt.  Just as the old saying goes, "no plan survives contact with the enemy", so to do well planned sessions play out differently than the game master expects.  Accept this, as it is true far more often than not. (It also part of the fun of being the game master!)

Remember that as the game master you are not opposing the players.  You are narrating the non-player components of your game.  Together, you and your players are constructing an entertaining, dare I say "exciting", story that you cooperatively create.  Don't get dragged into the "me vs. them" trap so many people fall into.

Rose of Relange will have experience awards that are largely based on how much the players enjoyed the session.  This is an abstract measure of the group's fun for the session that will let the group directly affect the speed at which character development progresses and serves as feedback to the game master.

Table-top role-playing games are cooperative, after all. 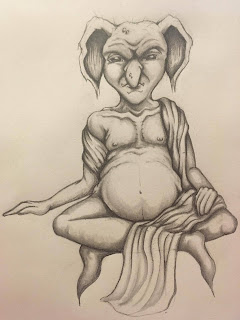 Another piece by the very talented: Jennifer Fraggle Dee

Comments are welcome below.  Please join me next time.😉

You can follow Sinopa Publishing on Facebook, and see new art produced for my products (I try to release  a bit of new art every week or two).